Preparing for the Expedition A week prior to March, Alex Paullin, our Founder at Conservation Music (CM), landed in Africa to lay groundwork and prepare for Expedition #K2K, a 13-month sea-to-summit caravan from Cape Town’s drying coast to Tanzania’s melting glacier. Throughout the expedition, our plans are to develop thirteen new globally inspiring educational songs...

Preparing for the Expedition

A week prior to March, Alex Paullin, our Founder at Conservation Music (CM), landed in Africa to lay groundwork and prepare for Expedition #K2K, a 13-month sea-to-summit caravan from Cape Town’s drying coast to Tanzania’s melting glacier. Throughout the expedition, our plans are to develop thirteen new globally inspiring educational songs and videos in local languages, amplify the voices of local eco-nonprofits and relevant organizations, offer global exposure to local eco-artists, while following up on past CM projects and scouting for future ones. We believe strongly in our work, knowing that it speaks loudly within the global conversation of our suffering planet.

With the expedition launch date looming, Alex booked it from the International Airport in Johannesburg, South Africa, over to Lobamba, Swaziland, to pick up our Nissan X-trail. After several days of setting preparations for our Swazi-based project this upcoming May, Alex headed over to Lesotho for a few meetings, and then further south to Cape Town’s International Airport to meet up with incoming field crew members, Chris Velosovich and Bryan Murphy. Alex enjoyed the last hours of his solo journey by visiting the Valley of Desolation and connecting with Giant Flag, a carbon sequestering project in Graaff Reinet, South Africa. Take an inside look into Alex’s preparations and pit stops by checking out these YouTube videos filmed throughout his travels from Swaziland to Lesotho, Lesotho to Graaf Reinet, and Graaff Reinet to Cape Town.

Leg 1 of Expedition #K2K is Underway!

On February 28th, the rest of us joined Alex in Cape Town, South Africa, lugging along the production and field gear needed for thirteen months of producing sound and video content along Africa’s weathered coast. Check out this behind the scenes YouTube video from CM’s Visual Production Manager, Bryan Murphy, to see how the production crew packed for this grand expedition.

When we headed to claim our luggage, all of our gear was searched and possessed by airport customs. Without a resolution at hand, we decided to get to work by collaborating with Jack Mantis Band and Gershan Lombard: KhoisanBoy.Man on CM’s first #K2K project, an eco-song and music video regarding climate change, water scarcity, and unity. The focus of this production stems from the pressing issue of Cape Town’s water crisis, which is rapidly heading towards #DayZero. Learn more about #DayZero on Cape Town’s Day Zero Dashboard.

Throughout our time in Cape Town, we were set to work closely with Gershan, Jack, and Jack’s friend Philip Pells, as they graciously shared their home and studio spaces with us. As owner of Africa Sun Studios, Phil not only shared his space with us, but also contributed top-notch sound engineering skills and bass playing to the track. After rehearsing and working out the kinks, we brought on Chuma Preshy Mgcoyi, a Xhosa singer, to add beautiful vocals in her native tongue. Together, we meticulously crafted and recorded beautiful content for the #DayZero eco-production.

Despite focusing heavily on the #DayZero eco-production, we pressed forward on other media projects, including content for our field updates on National Geographic’s OpenExplorer platform and amazing footage for CM’s fifth WebSeries episode, our first of Expedition #K2K. As we wrapped up our first week in Cape Town, we found it necessary to travel to a local freshwater spring to replenish drinking water for our household. With a daily limit of 25-litres, each of us carried five 5-litre bottles to fill. We were shocked to learn that the spring drains directly into the ocean, wasting millions of gallons of potable water each day. This is exactly what we are on the lookout for, and unfortunately these environmental impacts aren’t hard to spot. With the eco-production flowing nicely, we headed over to Elandsbaai, a secluded surf spot, for two nights of camping and hanging with friends. As the track continued to expand, we brought in Paulo Costa on clarinet, Rob Coutts on sax, and Buck Roger on violin. 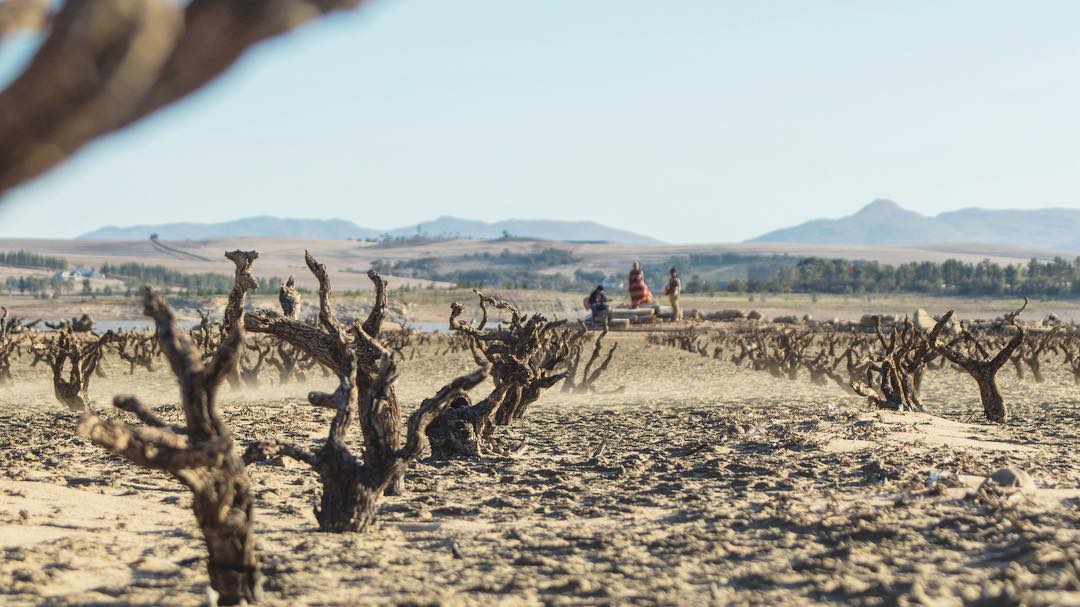 Following the short break, we grooved back into the workflow by tracking the eco-song and venturing to several impacted locations to shoot the music video with Jack, Gershan, and Chuma. Our first shoot took place at Theewaterskloof Dam, a once thriving source of water and destination for boating and fishing. Now, most of the area is completely dry, revealing remains of dead fish, capsized yachts, desolate vineyards, and collapsed villages. Check out the aerial footage that we recorded while flying our drone throughout the barren lands. Theewaterskloof is an unfortunate example of how extreme Cape Town’s water crisis is, making it a perfect location to film. With most of our camera gear still held up at customs, we weren’t certain how we would complete the video. We ended up crossing paths with a fellow American from Philadelphia, Luke, who is a young filmmaker also documenting the water crisis. He decided to spend time with us and help out with the shoot. The odds of that happening blew us all away, and we could not be more grateful for the turn of events. 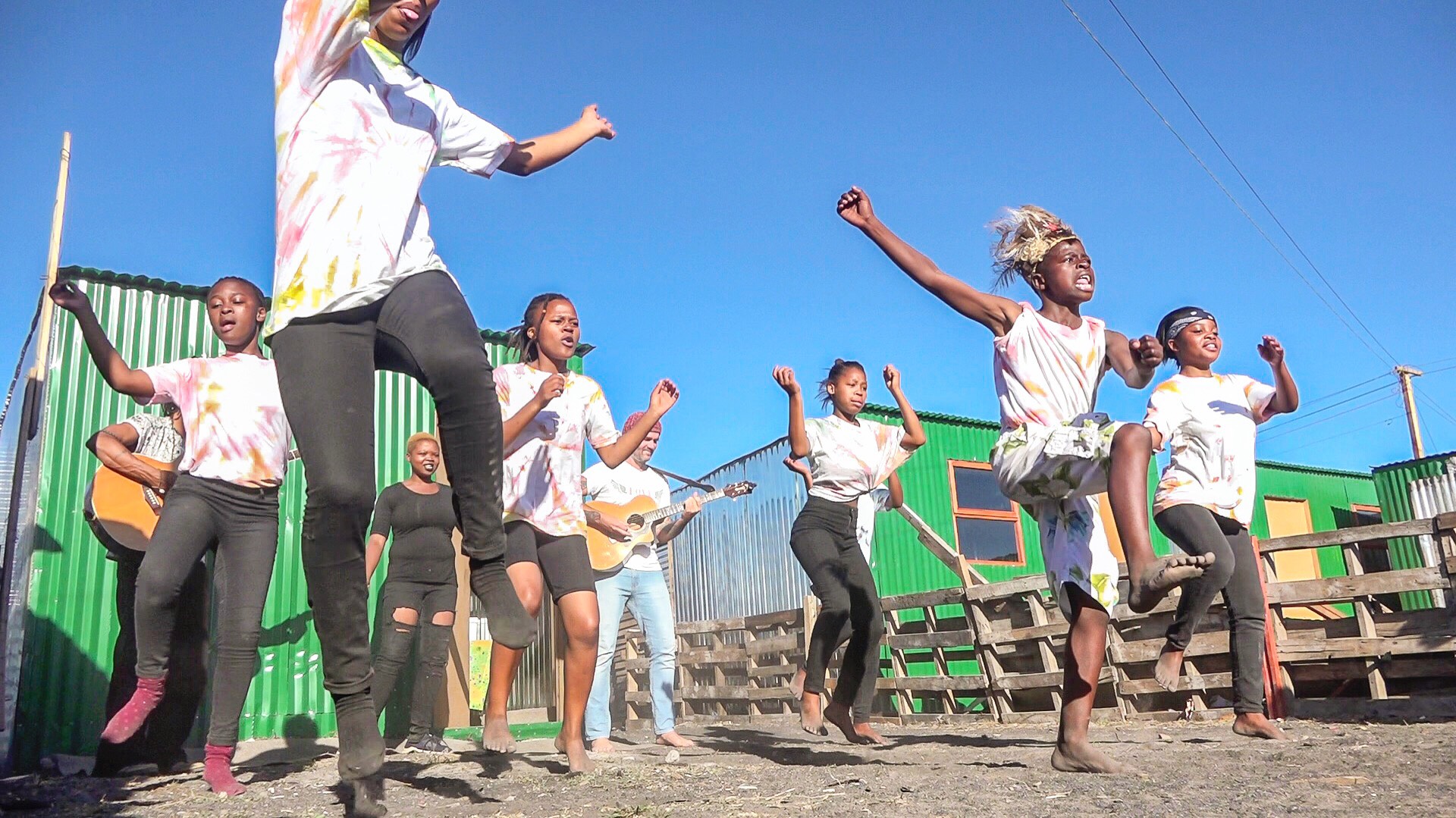 After a day and a half of shooting at Theewaterskloof, we ventured to Philippi Township, an extremely low-income area that is home to many people and programs with hope for the future. The Philippi Dance crew is a great example, as their team of young dancers, led by our friends Cosmos and Suzie, lend a traditional Xhosa Rain dance as footage for our #DayZero music video. It was inspiring to film these optimistic young teens, and we are excited to include them in our eco-production.

On March 22nd, we performed an acoustic rendition of the song at Café Roux in Noordhoek during Jack’s solo show, including other brilliant guest musicians throughout the night. The evening was a tremendous success for CM, as we made many new connections and friends, including Lorraine, an Afrikaans artist and model. We invited her back to the studio so that she could face paint Jack, Gershan, Chuma, which we ended up filming in an incredible time lapse video. 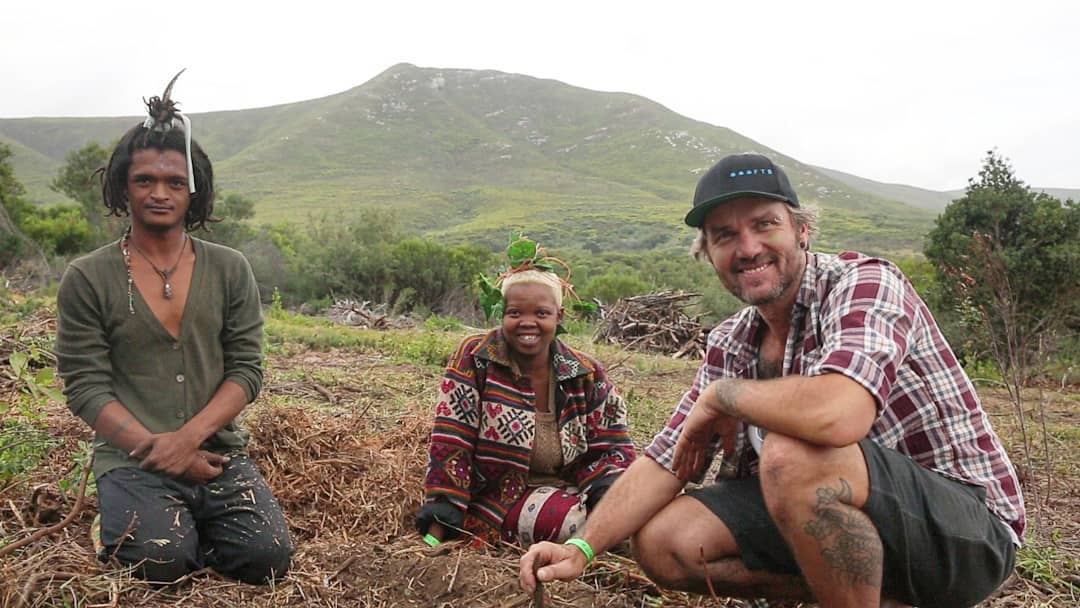 To wrap up location shooting for the #DayZero music video, we joined our friends at GreenPop in the Platbos Forest Reserve for their Reforest Fest. Over the course of two consecutive weekends, volunteers planted over 8,000 trees, soaked in environmental education, and intensified their connection with the planet.

With the doors closing on March, we remained gearless and unsure of how we could move forward with the expedition. Luckily, Phil made a few phone calls, and successfully retrieved all of our gear from customs. Aside from owning the studio, Phil also works at a music equipment warehouse and importer company, called Paul Bothner, where he was able to sponsor us amazing new gear, including microphones, Bluetooth speakers, and various cables. With our gear finally in hand, along with some new additions, we extended our gratitude and respect to the Cape Town crew, and then headed out for the second leg of the expedition to Lesotho. 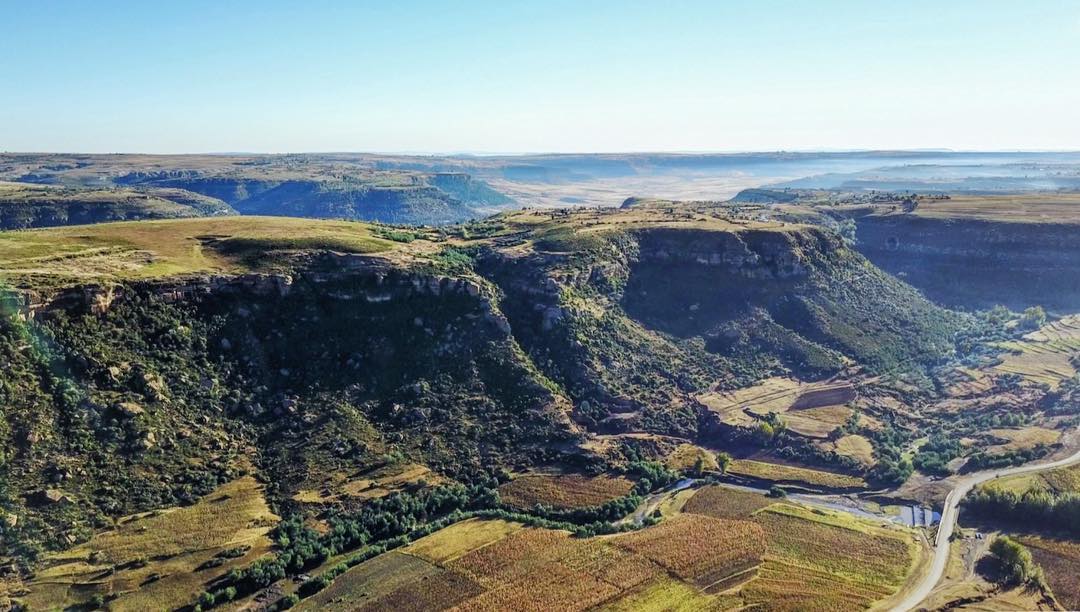 As we begin our next project in Maseru, Lesotho, we are excited to share the full Webseries On The Beating Path… Episode 5: #K2K Leg 1 of 13 – Cape Town, which recaps on all the work we completed last month. Throughout each phase of the expedition, we will continue sharing content illustrating our travels, the people we work with, the process behind each eco-production, and a feature song and music video from each location. Stay tuned for the debut of our #DayZero production, due for release in early April, we think you’re going to love it.

Expedition #K2K is our third iteration of long-term field work, and it is by far the most exciting. To learn more about CM, and to stay connected throughout the mission, please subscribe to our Newsletter below, check out our blog on National Geographic, and follow us on Facebook, Instagram, Twitter, and YouTube. For live updates from the field, be sure to check out our page on National Geographic’s newest digital journaling platform, OpenExplorer. If you would like to contribute to Expedition #K2K, please visit our Patreon page, where you can schedule monthly donations of any amount.

This post was written by Charles Ross for Conservation Music.

Conservation Music is on a mission to produce and promote musical media that educates listeners and viewers in conservation and sustainability, with an emphasis on rural developing communities, and to serve as a platform for similar efforts. Currently, the organization primarily collaborates with musicians throughout Southern Africa, catalyzing songs in local genres and local languages regarding local conservation issues in countries like Lesotho, Botswana, Angola, and more.

After years of soul-searching and months in the African wilderness with the National Geographic Okavango Wilderness Project, musician and geographer Alex Paullin combined his foremost passions and founded Conservation Music, a non-profit aiming to foster a global culture of sustainability using music as the messenger. Throughout his life he aims to expand the Conservation Music movement globally, in hopes that his lifetime will see and hear songs of conservation being sung throughout the world.

Conservation Music Team
After years of soul-searching and months in the African wilderness with the National Geographic Okavango Wilderness Project, musician and geographer Alex Paullin combined his foremost passions and founded Conservation Music, a non-profit aiming to foster a global culture of sustainability using music as the messenger. Currently, the organization collaborates with musicians throughout Southern Africa, catalyzing songs in local genres and local languages regarding local conservation issues in countries like Lesotho, Botswana, Angola, and more. Throughout his life he aims to expand the project globally, in hopes that his lifetime will see and hear songs of conservation being sung throughout the world.